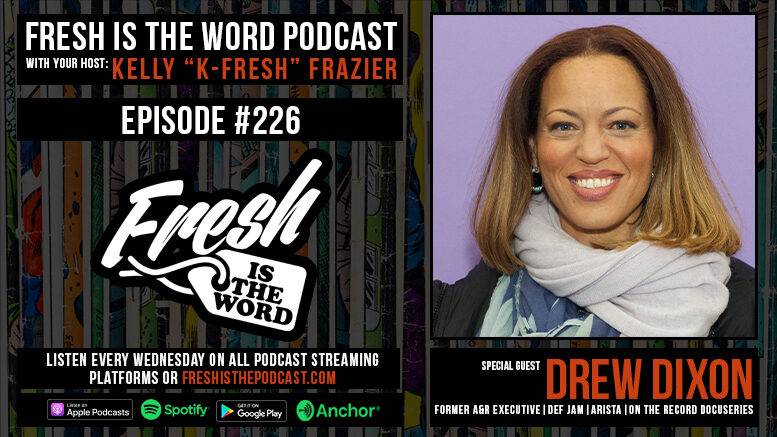 Hosted by music/pop culture journalist Kelly “K-Fresh” Frazier, Fresh is the Word aims to tell the stories from a variety of different voices including women, people of color, and the LGBTQ community through the artistic lens of pop culture. Joined by comic creators, authors, actors, comedians, photographers, sex workers, scientists, athletes, and even other podcasters, we talk about many topics including overcoming creative obstacles, representation in the arts, gender and sexuality issues, LGBTQ issues, and other topics adjacent to lifestyle and pop culture.

The guest for this episode is Drew Dixon, the accomplished former Vice President of A&R at Arista Records, a former Director of A&R at Def Jam Recordings, the former General Manager of John Legend’s independent label Homeschool Records, and the former manager of recording artist Estelle. Dixon is the center subject of the HBO Max Docuseries On The Record, which presents her powerful haunting story as she grapples with her decision to become one of the first women of color, in the wake of #MeToo, to come forward and publicly accuse hip-hop mogul Russell Simmons of sexual assault. It also features the stories of other women accusing Simmons of sexual assault too including founding member of the first all-female DJ and rap group “Mercedes Ladies” Sheri Sher and former model, now domestic violence awareness activist Sil Lai Abrams. The film also dives into the abuse she suffered from L.A. Reid during her time at Arista. We talk about the documentary, along with her impact on the music industry including her work on projects like Method Man & Mary J. Blige‘s “I’ll Be There for You/You’re All I Need to Get By”, The Show Soundtrack, Q-Tip‘s Amplified LP, and Estelle’s ‎Shine LP. We also talk about how the subject of racism, colorism, misogyny, and rape culture are present in our culture.

TRIGGER WARNING: There is discussion of rape and abuse in this episode.