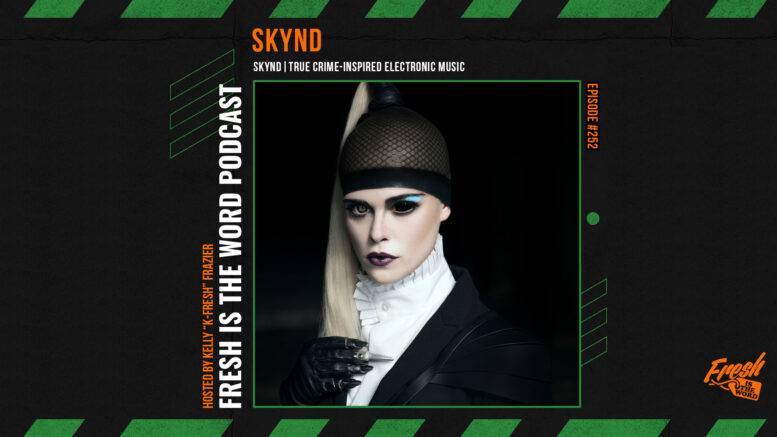 For this episode, I’m joined by Skynd, lead singer and one half of the industrial-tinged, true crime-inspired electronic duo also known as SKYND.

SKYND is the dark creative outlet for Skynd, along with producer and multi-instrumentalist Father. SKYND released Chapter I in 2018, followed by Chapter II in 2019. Now, with over 18 million hits on YouTube, “Michelle Carter” marks the second single in Chapter III, following 2020’s “Columbine.”

Each single and accompanied video are titled after the name or place of the subject. On Chapter I, the duo tackles Richard Ramirez, Gary Heidnik, and Elisa Lam. Ramirez was found guilty on 13 counts of murder (including children), 5 attempted murders, 11 sexual assaults (including children), and 14 burglaries. Heidnik kidnapped, tortured, and raped six women, killing two of them, while holding them prisoner in a pit in his basement in Philadelphia. The body of Elisa Lam, also known by her Cantonese name, Lam Ho Yi, a Canadian student at the University of British Columbia in Vancouver, was recovered from a water tank atop the Cecil Hotel in Downtown Los Angeles on February 19, 2013. She had been reported missing at the beginning of the month.

On Chapter II, SKYND tackles the cases of Katherine Knight, Tyler Hadley, and Jim Jones. Katherine Knight is the first Australian woman to be sentenced to life imprisonment without parole. She was convicted for the murder of her partner, John Charles Thomas Price, in October 2001. Knight stabbed Price to death, skinned him, then put his skin on a meat hook and cooked his head and parts of his body with the intention of feeding them to his children. Tyler Hadley, 17, had severe mental problems. He takes 3 XTC pills and goes to his mother, Mary-Jo. He starts beating her with a hammer. Hearing screams, Tyler’s father, Blake, runs to the scene. Tyler beats his father also to death. He spends three hours cleaning up the mess. Then, Tyler makes a Facebook post letting people know that he is hosting a party that night. About 60 people gather for the party. That night, Tyler shows his best friend, Michael Mandell, the master bedroom with the blood and the 2 bodies in that room. Cult leader, Reverend Jim Jones, the self-proclaimed “messiah” of his evangelical flock, led his followers to a mass murder-suicide (909 inhabitants of Jonestown, 304 of them children).

And currently on Chapter III, the duo dives into the cases of Columbine and Michelle Carter. The Columbine High School massacre was a school shooting and attempted bombing that occurred on April 20, 1999, at Columbine High School in Columbine, Colorado. The perpetrators, twelfth grade (senior) students Eric Harris and Dylan Klebold, murdered 12 students and one teacher, before simultaneously committing suicide in the library. Michelle Carter was convicted of manslaughter for urging her 18-year-old boyfriend, Conrad Roy, to commit suicide.

SKYND is unique in the way of releasing their singles one at a time because so much detail goes into their creations, as Skynd does heavy research on each subject and then must condense it all into a song and a video along with her collaborator Father. All the information above was taken from the band’s web site skynd-music.com (and YouTube), where you can find more information and links about all the subjects in the Case Files section.

During my conversation with Skynd, we talked about how her upbringing lead her into an interest in true crime subjects, meeting Father, the process that goes into every song and video, and the creative outlet she feels doing this SKYND project, and much more.