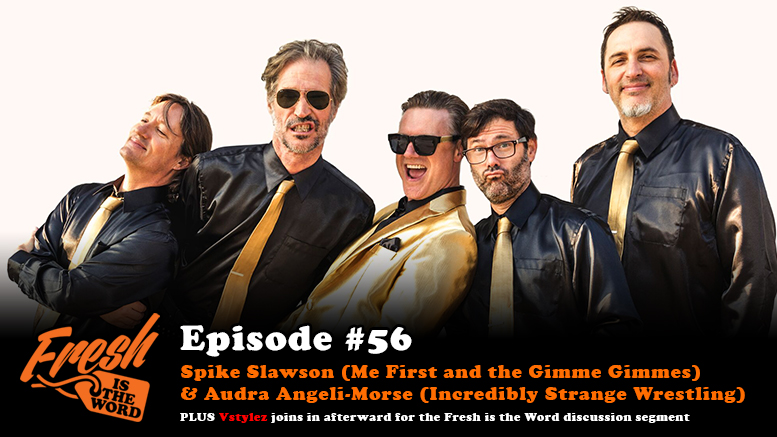 For this week’s Fresh is the Word, K-Fresh is joined by Spike Slawson, the lead singer of the wildly fun cover band Me First and the Gimme Gimmes along with their manager and also promoter of Incredibly Strange Wrestling, Audra Angeli-Morse. Incredibly Strange Wrestling was a wrestling promotion that started in the mid 1990s in San Francisco that mixed a lucha libre style of wrestling with crazy, controversial gimmicks along with live bands along with touring on festivals like Warped Tour, Deconstruction Tour, Lollapalooza, SXSW, Sasquatch, and Virgin Music Festival among others. Spike and Audra talk about being a part of this crazy wrestling experience along with how it fit in with the days of San Francisco before the tech companies and others came into the neighborhoods. A lot of great story behind the wrestling company and just the politics of the world are talked about.

And as always, Vstylez joins in after to talked about what’s going on in the world of wrestling and MMA. We talk about the Jose Aldo vs Max Holloway fight, Demetrious Johnson’s beef with the UFC, and a recap of WWE’s Extreme Rules.