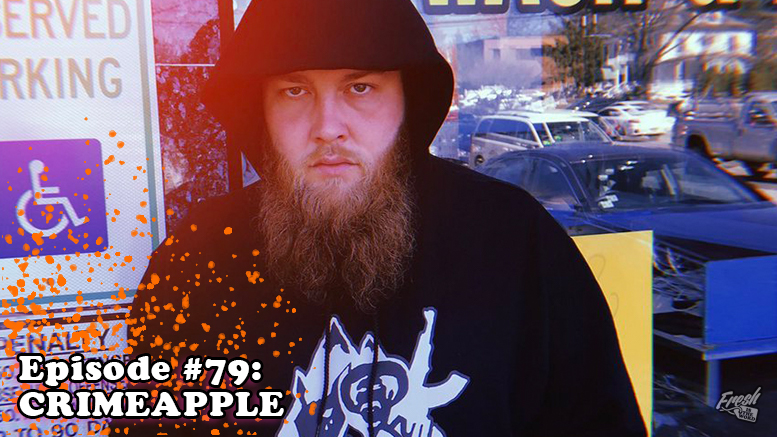 EPISODE #79: CRIMEAPPLE – IN THIS EPISODE:

This week’s guest is the New Jersey born and bred hip-hop artist CRIMEAPPLE. During our interview, we talk about his new album Aguardiente, produced entirely by Big Ghost Ltd (which was the Fresh Pick of the Week back in Episode #73), along with building your brand as an extension of your artistry and keeping your integrity when you career starts ascend. CRIMEAPPLE is definitely a part of the new era of hip-hop artists bringing a lyrical heavy, dark and grimy sound reminiscent of the early days of Mobb Deep and currently in the same vein of the likes of Roc Marciano, Westside Gunn, and Conway. An aesthetic where the product is heavy in artistry and culture.

For this episode, CRIMEAPPLE chose one of his current collaborators Buck Dudley as a suggestion of someone to interview for Fresh is the Word.

This episode’s pick is the new album Manifest from the Austrian drum-n-bass producer Mefjus, released this past week on Vision Recordings. I’ve been following the release of tracks from this album for a while now through Noisia Radio, hosted by the Dutch trio Noisia who also run Vision Recordings. I was instantly enthralled by diversity in the sounds from Mefjus, the mixing of the hard and soulful drum-n-bass sounds and not necessarily sticking to the stereotypical formula within the genre.

In a quote released from the label, this is how Mefjus describes the new album:

“This new album is the product of a 2-year process. The LP reflects what I love about the diversity of drum & bass and all its sub-genres as well as what I enjoy playing at clubs and festivals. It was crucial to me that this new chapter was a step up in content, sound design and songwriting which influenced the decision to include only solo material and even master it myself. Manifest is Mefjus 2.0″