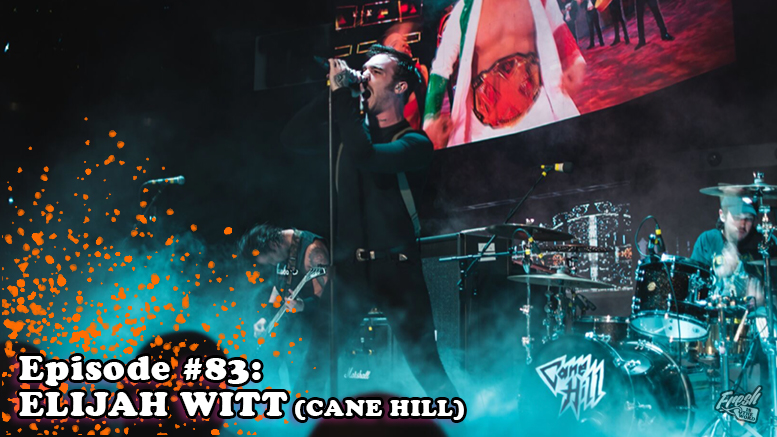 This week’s guest is Elijah Witt, lead vocalist of the New Orleans-based metal band Cane Hill. Earlier this year, the band released their sophomore album Too Far Gone via Rise Records. Cane Hill was recently featured on WWE wrestling’s NXT programming, where their songs “It Follows” and “Lord of Flies” served as theme songs to the NXT Takeover event Wrestlemania 34 weekend in New Orleans. Cane Hill also performed at NXT Takeover opening up the event and also performing wrestler Ember Moon’s entrance alongside Lzzy Hale of the band Halestorm. During our interview, Witt details the whole processes of linking up with the WWE, working with Triple H, and the whole preparation of performing at NXT Takeover in their own hometown. We also talk about Witt’s favorite wrestler these days Braun Strowman, the band’s new album, and how they’ve been able to get in front of different types of crowds to maximize their exposure. A lot of great advice about touring with different types of bands and collaborating with other companies that have a common goal.

For this episode’s suggestion for a future Fresh is the Word guest, Elijah Witt chose Landon Tewers, vocalist of the band The Plot In You.

This episode’s pick is the debut album Disobey from the metal band Bad Wolves. They broke out quickly into the mainstream with their cover of The Cranberries’ “Zombie”, a track that would turn into a tribute to the late frontwoman Dolores O’Riordan who was all set to reprise her vocals with Bad Wolves for the cover before her passing. While the band formed just last year, all of the members are no strangers to rock music putting in time with other known bands throughout the years. With “Zombie” killing it on rock radio right now, Bad Wolves have become the newest rock band to watch and their debut album Disobey is chock full of great records that will keep their momentum going.