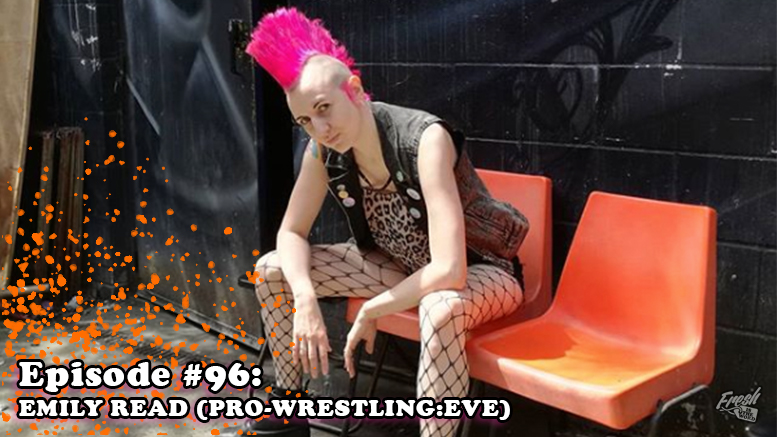 This episode’s guest is Emily Read, the co-owner and founder of the UK-based wrestling promotion Pro-Wrestling: EVE. Established in 2009, EVE prides itself as the “Riot Grrrl” of women’s professional wrestling, and being unapologetic, feminist, punk and political! Back on May 5th, EVE ran Europe’s biggest ever women’s wrestling event,Wrestle Queendom, at the York Hall in Bethnal Green, London. The event featured EVE stars like Charlie Morgan, Sammii Jayne, and Millie McKenzie, among others, and wrestling legends like Aja Kong and Meiko Satomura. During our interview, we talked about the inception of the Wrestle Queendom event and how everything was planned for it, the Pro-Wrestling: EVE Bishopsgate Institute Hall of Fame, the lessons to be learned by being a woman in a male-dominated wrestling industry, creating safe spaces at EVE shows, being the figurehead of EVE, keeping her individuality, the important of mental health, and dealing with her mental health.

Each episode, the guest is asked to suggest someone from their life/career that should be on Fresh is the Word that would have good stories to tell. Emily Read chose Pro-Wrestling: EVE’s own Rhia O’Reilly.

This episode’s pick is the split 12″ featuring Portland’s Cliterati and Oakland’s Violation Wound via Tankcrimes. Cliterati is an Oregon-based hardcore punk collective featuring members from Poison Idea, Voetsek, and Murderess that is best described as Discharge/Doom-influenced queercore/d-beat/thrash crust. They believe in equality through inclusion. On the flipside, featuring Autopsy and former Abscess member Chris Reifert on guitars and vocals, alongside bassist Joe Orterry, and drummer Matt O’Connell, Violation Wound comes with hard and aggressive punk rock! What’s great about the split is that really does boast inclusion. These are two bands that have common goals, but do it in their own unique way. It’s all about coming together and letting it all out through some ass-kicking riffs!

Cliterati also released the three-track Nuked At Birth EP recently, available for free download on their Bandcamp page at cliteratipdx.bandcamp.com.