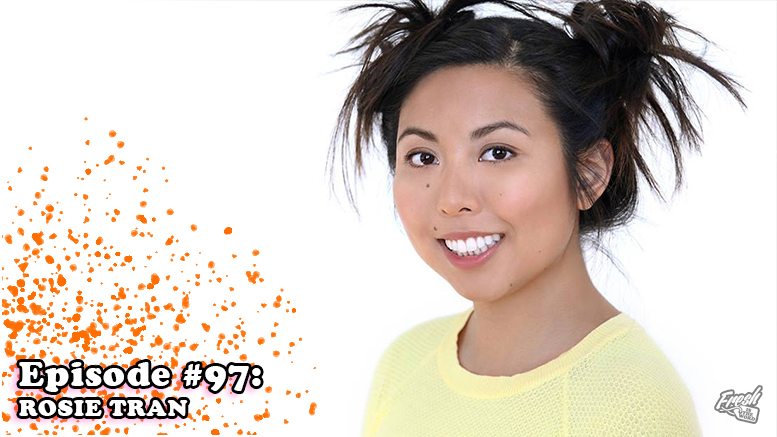 This week’s guest is stand up comedian, writer, podcaster, and actress Rosie Tran (as suggested by B.J. Mendelson in Episode #89). Originally from New Orleans, Hollywood is her home now and she has performed in comedy venues both locally and internationally. She also hosts a couple of podcasts, Hello Crypto Kitty (with Esther Ku) and Out of the Box. During out conversation, we talked about her move from New Orleans to Los Angeles, how she got into comedy, the difference between a sense of humor and real comedy, the mental health aspects of being a comic, crafting her material, perseverance, the roles of asian women and women in general in comedy, political correctness in the #MeToo movement, and her podcasts.

Each episode, the guest is asked to suggest someone from their life/career that should be on Fresh is the Word that would have good stories to tell. Rosie Tran chose a recent guest on her podcast Out of the Box, Chief Happiness Officer, World Traveler, and Ted Speaker, Arnaud Collery.

Episode #73: Pursuit Grooves – Talking about her new album and her beginnings in music and more

Episode #78: Nicolay – New album “Glaciers” and on being an independent music artist