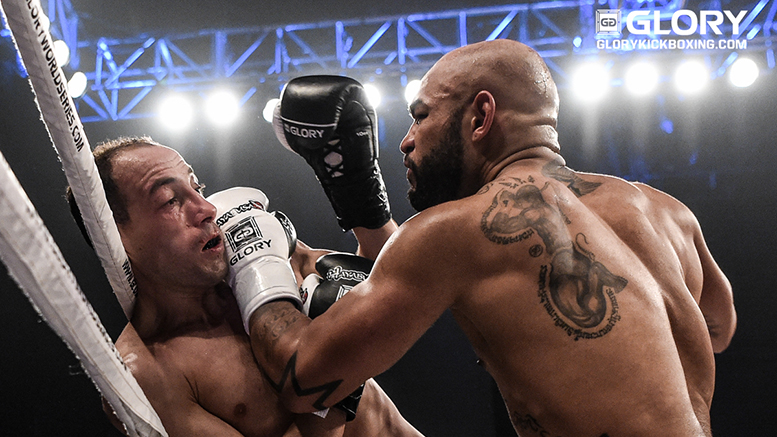 GLORY Kickboxing came to Los Angeles this past weekend for GLORY 37 held at The Novo. The event included the main five-fight card GLORY 37 Los Angeles that was shown live on ESPN3 and the five-fight GLORY 37 Superfight Series streamed lived on UFC Fight Pass. Among titles at stake this glorious evening was the middleweight world title between champion Jason Wilnis and challanger Israel Adasanya, along with the featherweight world title between Robin van Rossmalen and challenger Matt Embree.

While kickboxing doesn’t necessarily get all its due in the United States in the realms of combat sports, GLORY still strives to put on excellent events in and out of America. The Novo is a beautiful theater, more of a place to see music artists or have it as a club setting, but GLORY made due in this space and with the way the ring and the lighting was set up, the appearance televised on UFC Fight Pass and ESPN3 made it look like a much bigger place. The intimacy of The Novo theatre for a facet of combat sports that is not as popular here as it is in Europe, for example, played incredibly into the vibe of the night. Most of the seats, whether on the main floor or the balcony, were not bad at all; you could easily enjoy the fights from anywhere.

The GLORY 37 undercard showcased local California talent and the biggest pop for the early crowd was definitely for the Josh Aragon vs Joe Davison bout, a fight that would go the three rounds to a unanimous decision of 30-26 from all the judges in favor of Josh Aragon. While being there all evening from the start of the undercard fights equaled to about seven hours of fights, the entertainment of the action and the comfort of the venue didn’t make it grueling at all.

While Jason Wilnis and Robin van Roosmalen both retained their respective titles, I think the star of the night was the winner of the one-night, four-man welterweight contender tournament Yoann Kongolo, The tournament – which featured an opening round of Alan Scheinson verses Karim Benmansour that would go to Benmansour by spilt decision (29-28, 30-27, 28-29), along with Yoann Kongolo against Konstantin Khuzin which Kongolo would prevail via unanimous decision (30-27 x3) – would crown an opportunity sometime this year to fight for the welterweight title, which is currently held by Cedric Doumbe, who recently defeated long time champion Nieky Holzken via unanimous decision at GLORY Collision on December 10th.

In the finals, Yoann Kongolo would defeat Karim Benmansour in the 3rd round via knockout to claim his spot for an opportunity at the welterweight crown in GLORY in the future. Kongolo, who hails Switzerland as his home, not only walked out GLORY 37 victorious from the fight aspect, but he showed a potential and charm that could separate him from the bunch. From his loose, relaxed arrival to the ring dancing to his entrance music, to his post match interview, Kongolo showed a charisma that I found lacking throughout the GLORY line-up this night that could be the edge he needs to continue to get noticed in this organization.

Another highlight of the evening was the slugfest between a couple of heavyweights in Guto Inocente and D’Angelo Marshall. When two guys of that size hit the ring, you can expect some hard-hitting action and that’s what we saw. Inocente did drop Marshall in the second round and the referee was close to stopping it after a barrage of punches and a signifcant head kick , but with strong showings in the first and third rounds, it ended in a majority draw. However, in GLORY, that means we go into a fourth round, which we see Inocente get the victory over Marshall via unanimous decision (10-9 x3).

GLORY 37 was a great event with the high level of production quality and use of the space at The Novo. As I already noted, the charisma shown by Yoann Kongolo is something missing throughout the card though and I while I think all fighters should try to be themselves, its going to be fighters like Kongolo that are going to peak the interest of this sport to people that are not just hardcore fans. Kickboxing is a combat sport that is easily digestible with most fights being three rounds of three minutes, so with a little more showmanship, but nothing too in-your-face, kickboxing like GLORY could continue to grow in the USA.