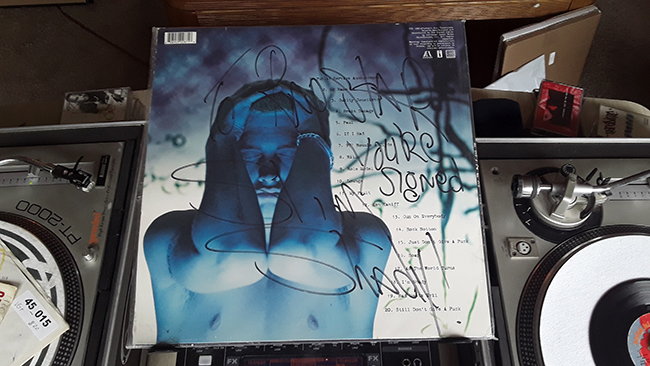 **Usually Renaissance Soul Detroit Music History Post of the Day are only on Instagram (@rensoulpodcast), but this story ended up being too long.

Pictured is an original vinyl pressing of the Slim Shady LP vinyl from back in 1999. Everybody knows about everything with this album, so this is a story about the autograph from Eminem on it.

Shortly after the release of the Slim Shady LP in February 1999, one of the most prominent record stores in the Metro Detroit area Record Time, located in Roseville, MI, hosted an in-store with Eminem.

The line a wrapped all along the aisles inside of Record Time, so me and my friend Steve Newhouse were in line for quite some time. I didn’t know many people in the Detroit music scene at this and this is before I even had the nickname “K-Fresh”. As you can see in the picture, Eminem made the autograph out to “Rap Star”. That was my nickname at East Detroit High School given to me by Joe Maxinowski for, well you know, my vast knowledge of rap and hip-hop. Joe was kind of being sarcastic about the nickname I think, but I kept it. Anyone that knows me back from the early days of the Internet knows my screen name as “darapstarr”. That’s how I liked to spell it.

So, I’m in line at Record Time to meet Eminem with Steve. At one point, the store’s sound system kept playing “B.I.B.L.E.” from Killah Priest on loop and no one from the store caught it. I think me and Steve got obsessed with that song after. One thing that stood out about that wait in line was that we saw a couple girls that we went to school with further up in line, one being Kristin Maccioche. I secretly really liked her. She was so nice and I thought she was so fine. I never told her that I liked her. I think she might have liked me too. She used to look at me in a certain way that’s hard to describe. Maybe that was nothing though. We chatted with them while in a line at times even though we were like 30 feet apart. I think I might have seen House Shoes running around the store, but that was before I knew him.

Finally, we get to the front of the line to meet Eminem. I go first and Steve is behind me. Eminem asks who to make it out to and I said that my nickname is “Da Rap Starr”. Em asks if I rap and I said, “a little bit” or something like that. So he asks me to rap for him. I can’t remember what I rapped but it was fun to do that. He was mad cool and fun to talk to. So as you can see in the photo, he autographs my record “To Rap Star: You’re Signed. Slim Shady”. So does that mean I’ve been signed to Shady Records all this time?

Anyways. I miss in-stores like that. He literally did talk with everyone that say. My friend Steve was jocking me for weeks after that, saying “Dude. You rapped for Eminem!”. It was such a fun experience during an exciting time in Detroit hip-hop when I was also starting to discover it all up close.