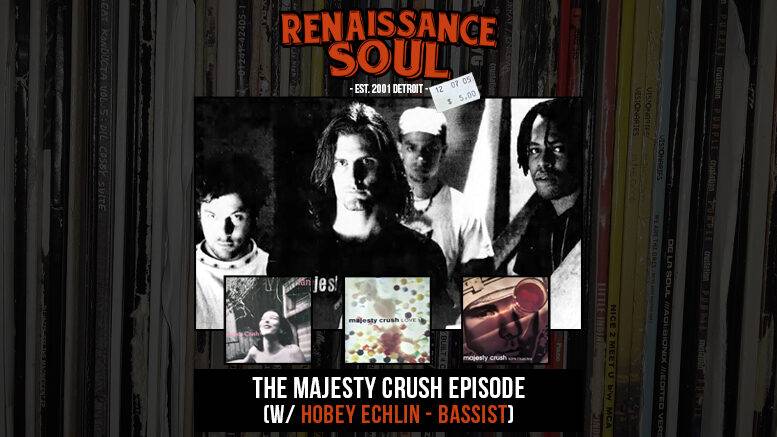 For this episode, your host Kelly “K-Fresh” Frazier is joined by Hobey Echlin, bassist of the early 90s Detroit shoegaze band Majesty Crush. They were an anomaly in the Detroit music scene as they were compared to bands with the shoegaze sound that typically comes from the UK, but they were oddly connected to so much within the city of Detroit. They were surrounded by other artists who also didn’t fit in any creative box while their lush, dreamy sounds along with the colorful members of the bands (especially vocalist David Stroughter) made them memorable around the city. But it was the passionate lyrics of Stroughter that set them apart and defined them. Majesty Crush captured a vibe of Detroit while pulling from their global influences.

The story of Majesty Crush is just as relevant today. With two of their members being Black men (drummer Odell Nails and vocalist David Stroughter), they would have to endure much of the same bigotry that we are still fighting against in the current Black Lives Matter movement. As for Stroughter, he would died during an altercation with the police in Los Angeles in January 2017, as this would be another instance where bring Black, having mental health issues, and how the police deal with such a situation come into discussion.

With Majesty Crush, it was as if they were too good of a band for this world. As you’ll hear with this conversation with Hobey Echlin, Majesty Crush were somehow in the most interesting places at the right times, but circumstances were not always on their side. They were definitely a band with a flame that shined too bright. They were special, but sometimes that means that flame burns out that much quick.

The story of Majesty Crush is done yet. Third Man Records is set to release Southeast of Saturn, a collection of music from Detroit’s space-rock/shoegaze/dream pop scene of the ‘90s, to be released November 20, 2020 digitally and on vinyl, and it will feature Majesty Crush’s “No. 1 Fan”. Listen in on this episode for an amazing story about how this came to be. Hopefully we can get all three of Majesty Crush’s main project re-released in the future, because as you’ll hear in this episode, it was one of David Stroughter’s last wishes for his music to be heard.

Episode #77: Stefani Manard – The psychology behind her comic book Psycho Path, the indie creative community, and growing up in Michigan