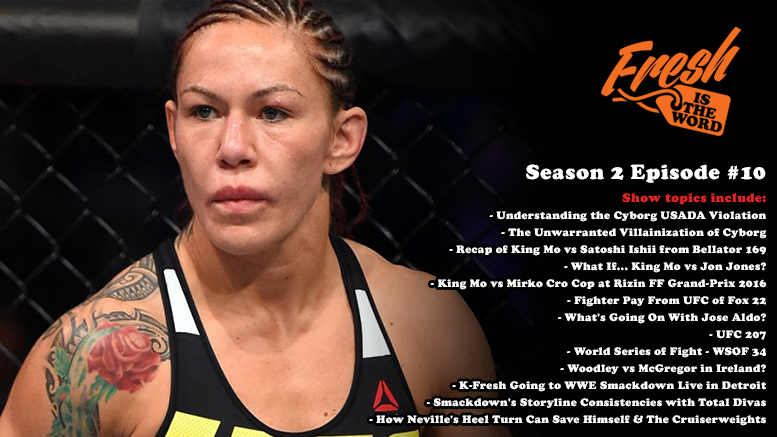 For the final episode of Fresh is the Word for 2016, K-Fresh is joined by his co-host Vstylez back home from being in Ireland with King Mo for his victory over Satoshi Ishii at Bellator 169. News in the MMA never sleeps and we talk about all of it along with K-Fresh’s trip to WWE Smackdown Live in Detroit this week. See everybody in 2017!

– Understanding the Cyborg USADA Violation
– The Unwarranted Villainization of Cyborg
– Recap of King Mo vs Satoshi Ishii from Bellator 169
– What If… King Mo vs Jon Jones?
– King Mo vs Mirko Cro Cop at Rizin FF Grand-Prix 2016
– Fighter Pay From UFC of Fox 22
– What’s Going On With Jose Aldo?
– UFC 207
– World Series of Fight – WSOF 34
– Woodley vs McGregor in Ireland?
– K-Fresh Going to WWE Smackdown Live in Detroit
– Smackdown’s Storyline Consistencies with Total Divas
– How Neville’s Heel Turn Can Save Himself & The Cruiserweights