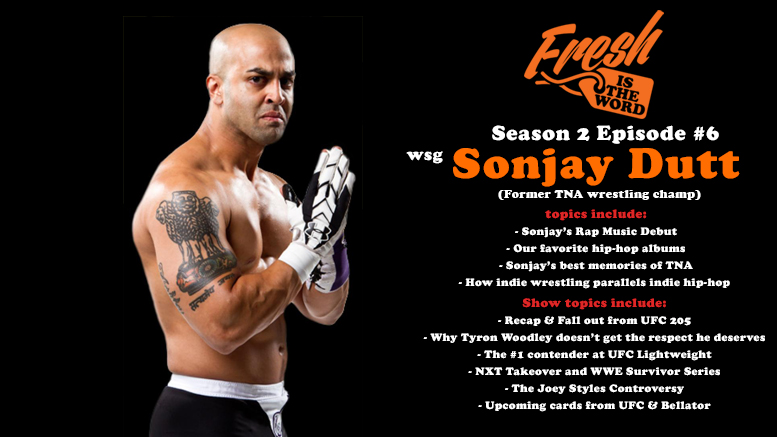 This episode of Fresh is the Word features a guest interview with former TNA wrestling champion and current staple of the indie wrestling circuit Sonjay Dutt (at 1:21:00 mark). We talk hip hop with him, including his rap debut earlier this year on the song “Moguls” by rap artist Vice (video link below). We also talk about his best memories of his time with TNA and break down this great time in indie wrestling. As always, K-Fresh is joined by Vstylez to talk about what’s going on in the world of MMA and wrestling, plus we talk about some funny stories going on in our lives like all the strip clubs that are open on a late Sunday night in Toledo, Ohio and how long the line was at Chick-Fil-A at Somerset in Troy, Michigan, along with the new albums from A Tribe Called Quest and Fatt Father.

Show topics include:
– Recap & Fall out from UFC 205
- Why Tyron Woodley doesn’t get the respect he deserves
– The #1 contender at UFC Lightweight
– NXT Takeover and WWE Survivor Series
– The Joey Styles Controversy
– Upcoming cards from UFC & Bellator